Tobacco use is the leading cause of preventable disease, disability, and death in the United States. Tobacco use among youth is of particular concern, as 90% of current adult smokers started smoking regularly at age 18 or younger.

Nicotine in the form of cigarettes, chew, cigars, and e-cigarettes is one of the most used addictive drugs in the United States. Tobacco use (either by smoking or chewing) increases your risk for many types of cancer, infertility, ulcers, lung disease, strokes, osteoporosis, etc. 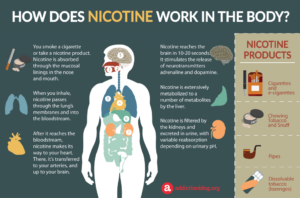 In January 1964, the US Surgeon General released the first report of the Surgeon General’s Advisory Committee on Smoking and Health. The release of the report was the first in a series of steps, still being taken more than 50 years later, to diminish the impact of tobacco use on the health of the American people. Another signification report was released in 2006 on The Health Consequences of Involuntary Exposure to Secondhand Smoke. This report declared there is no risk-free level of exposure to secondhand smoke which launched the passage of hundreds of smoke-free policies.

In early 2020, the Surgeon General released a new report Smoking Cessation: A Report of the Surgeon General. This report reinforced that quitting smoking is beneficial at any age and that certain sub-groups and population smoke at higher rates. It also stated that there is inadequate evidence to conclude that e-cigarettes, in general, help people to quit smoking.

Tobacco and The Environment

Cigarette litter is the #1 littered item in the world. 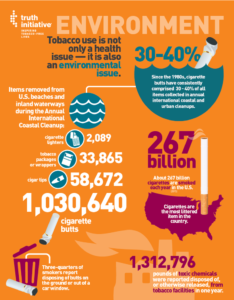 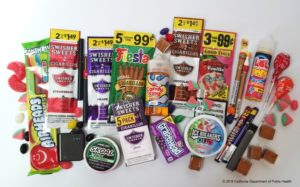 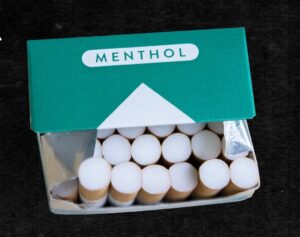 Flavored cigarettes were prohibited in 2009 under the Family Smoking Prevention and Tobacco Control Act, however menthol cigarettes, the most popular flavor, were exempt from this regulation due to the aggressive lobbying from the tobacco industry. Other flavored tobacco products still on the market are flavored cigars and electronic smoking devices (e-cigarettes or vapes).

The tobacco industry has a long history of using manipulative marketing tactics to get people hooked on their products. Flavored tobacco improves the taste and smell and masks the harshness, making it easier to try and ultimately become addicted.

E-cigarettes are now the most commonly used tobacco product among youth and come in over 15,000 different youth enticing flavors. The tobacco industry uses flavors to spark curiosity and mask the harshness of tobacco. Sadly, it works. 97% of kids who vape use flavors. They profit by hooking kids on flavored nicotine. When the product seems harmless, teen use rises.

According to the U.S. Surgeon General, nicotine alters adolescent brain development and is toxic in high doses. What is particularly alarming is that e-cigarettes can contain levels of nicotine comparable to or even higher than traditional cigarettes.

The start of the youth vaping epidemic started with The JUUL Wave. JULL is one of the top and most well known e-cigarette product. They are highly addictive and come in sleek designs made to attract young users. JULL looks like a USB flash drive, and can be charged in the USB port of a computer. The amount of nicotine in one JUUL cartridge is roughly equal to the amount of nicotine in a pack of cigarettes, or about 200 puffs, according to the product website. That’s double the concentration of nicotine found in other e-cigarettes, the American Academy of Pediatrics stated in its resource “JUULing: What Pediatricians and Families Need to Know.”

Resources for Parents/Caregivers About Vaping

Follow us on Facebook @vcctobacco for resources, information, local, state and national tobacco-related news and upcoming events and trainings