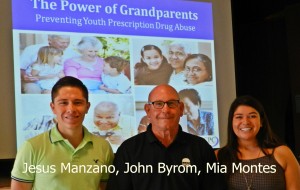 Grandparents play an important role in their grandchildren’s lives, and North County youth wanted to discuss how grandparents can use that role to prevent prescription drug abuse.

To educate residents about their role in prescription drug abuse, students from the North Coastal Prevention Youth Coalition and San Dieguito Alliance for Drug-Free Youth presented the “Power of Grandparents” on Thursday, July 23, at Oceana, an over-55 community in Oceanside. They discussed the prescription drug abuse problem and how everyone can play a role in prevention through safe and proper disposal of unused or expired prescription medications. 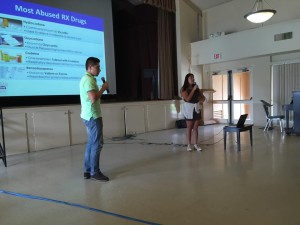 “The presentation was so much more than I could have ever imagined,” Johnson said. “Both youth were well spoken, informative and inspiring. We sincerely thank them for their part in the presentation, as well as Oceanside Police Department for collecting expired and unwanted prescription drugs. Dr. Gaspar also gave us valuable tools to ensure we take our prescriptions properly and avoid interactions with other medicine, food or supplements.”

Prescription drug abuse is one of the nation’s fastest growing drug problems, with overdoses causing more deaths than car crashes in the United States. The Partnership at DrugFree.org reports 64 percent of teens age 12 to 17 reporting they obtained prescription drugs through friends or relatives, leaving grandparents in a powerful role in prventing the misuse of prescription drugs. According to the National Instutite on Drug Abuse, persons aged 65 years and older comprise only 13 percent of the population, yet account for more than one-thired of total outpatient spending on prescription medications in the United States.

“Many grandparents are unaware of how important they can be in preventing youth prescription drug abuse,” said Craig Balben, board president of the North Coastal Prevention Coalition. “We hope our youth help educated and motivate grandparents on what they can do to keep their families safe.”

Attendees also had the opportunity to dispose of unused or expired medications on-site through an NCPC-sponsored prescription drug drop box.