Develop and promote a positive message and celebration on April 20 –
420 Remix: A Celebration of Sober and Drug Free

NCPC sponsored a  Arts & Video Public Service Announcement contest for students and youth groups across San Diego County to give them an opportunity to influence their peers in a positive way. The purpose of the Arts & Video PSA Contest is to engage youth in developing messages for their peers to increase youth perception of harm from marijuana use, and decrease marijuana use by youth. Over the past several years, fewer youth report believing that frequent marijuana use is harmful and more youth report using marijuana in the past month (SD CA Healthy Kids Survey).

For more information and to enter this years contest, please click here! 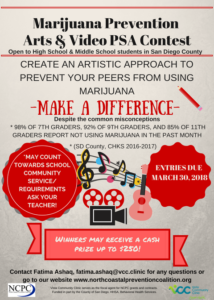 April 20th (420) is known in popular culture as an un-official marijuana smoking holiday and the time to smoke marijuana every day.  In California, this is a major phenomenon.  Our local adolescent treatment program administrators found that their clients were relapsing on April 20th, and other youth in their school disproportionately began smoking marijuana on that day.

In response, we partnered with the treatment program and school to create an after school carnival-like event that would encourage youth to remain after school and participate in fun activities without getting high.  The first of these events, held on April 20, 2004, attracted over 300 youth from 2:30pm-5:30pm. The following year, we allowed students from the middle school across the street to attend.  Attendance grew to 500 youth.

Soon after, the event was named “420 Remix: A Celebration of Sober and Drug Free Life Choices.”  We successfully secured sponsorship and support from a host of local companies including Coca-Cola, Chilis, Chick-fil-A, Wyndham Hotels, Best Buy, Surfride Surfshops, Asylum Surf Shop, RXYM Fashion USA, and many other companies.  After several years of locating the event at school sites, it was moved to the Oceanside Pier Amphitheater in 2008 when April 20 fell on Sunday.  That event attracted over 1,000 participants of all ages.  In anticipation of that event, we were honored by elected officials at the local, state and federal level who officially proclaimed April 20th to be “Sober and Drug Free Life Choices Day” in their cities and districts.

The following year, we moved 420 Remix to a local amusement park, Boomers!, teamed up with local service clubs and companies for support, and opened up admission to all middle school students in the Tri-City area (Carlsbad, Oceanside and Vista).  In both 2009 and 2010, this event attracted over 1,200 students.  Since its inception, this event has provided a safe and sober option for over 7,000 students on April 20th.

In addition to providing a safe and drug-free alternative activity for youth, the event also serves as an opportunity to inform parents about the dangers marijuana use by youth and of the meaning of April 20 (420).  We sent letters and flyers to all participating schools, and conducted presentations at parent and community meetings.  In 2009 and 2010, we also provided parents with information about marijuana as they arrived at the event to drop off the youth.  At each event we provided over 150 parent packets.  In anticipation of our event each year, we use media outreach to promote sober and drug free life choices.  We are featured each year on the morning TV news shows and have received extensive print and electronic media coverage at the event.

CADCA also produced a nationwide TV show called “Countering the Drug Culture” that featured the anti-marijuana work of NCPC, including 420 Remix: A Celebration of Sober and Drug Free Life Choices.  This was filmed in April 2009, and aired on CADCA’s programming in September 2009.