The PSA contest awards ceremony for 11th Annual 420 Remix: A Celebration of Sober and Drug Free Life Choices program, on April 20 at Boomers in Vista honored the North Coastal Prevention Youth Coalition with $1,000 for first prize. 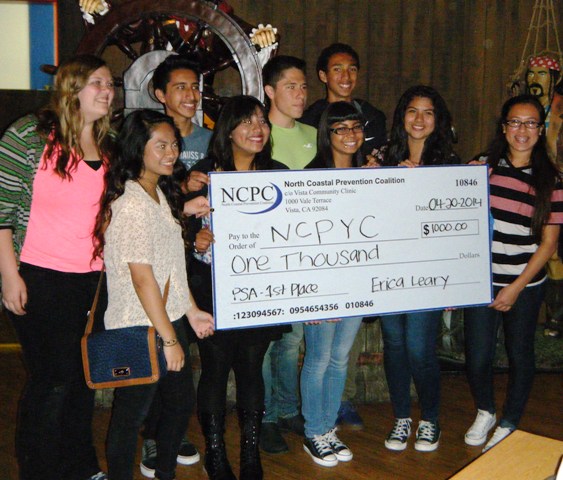 “The Libby Lake shooting proved to Oceanside youth that the drug life – including marijuana – isn’t harmless,” said President Aaron Byzak of the NCPC. “NCPC’s 420 Remix forces contestants to think about living a healthy life; free from drugs, alcohol and tobacco.”

Youth marijuana use has been on the rise since 2009. Fewer youth believe that frequent marijuana use is harmful as more youth report using marijuana in the past month, according to the California Healthy Kids Survey. Yet, marijuana is addictive and unsafe especially for use by young people. The adolescent brain is particularly susceptible to THC’s harmful and addictive effects which can decrease teen’s mental capabilities over the long term.

The PSA contest is co-sponsored by Occupational Health Services, San Diego County Department of Education Friday Night Live, Oceanside Unified School District, the Boys and Girls Club of Oceanside, and Natural High as a way to involve youth in thinking critically about what messages would influence their peers against marijuana use, and to tap into their creativity.