Alcohol advertising ads on Vista public land? Just might soon be a reality.

The North Coastal Prevention Coalition (NCPC) called and sent a letter to City of Vista officials expressing concerns about a plan proposing two digital message boards on State Route 78. The boards could display paid commercial messages for up to 85 percent of the time. But as currently proposed, Vista would not prohibit alcohol advertising on the billboards.

President Aaron Byzak authored a U-T San Diego opinion piece detailing the trend of cities monetizing assets to avoid raising taxes, like selling billboard ad space on public like. Yet, some agencies have adopted policies banning alcohol advertising due to the influential nature marketing has particularly on underage drinking.

In an excerpt from the piece, Byzak lays out some compelling research:

“Alcohol is an estimated $116 billion-per-year industry in the United States. Underage drinkers alone are responsible for 20 percent of all alcohol consumed and 19 percent, or $22.5 billion, of alcohol-industry revenues… 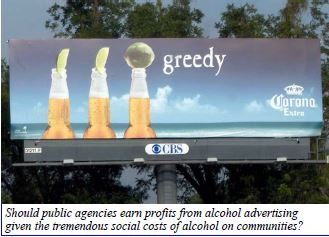 Strangely, the City of Vista cancelled previously set public workshops to discuss the proposal seemingly green-lighting the plan without public comment. Many advocates remain committed to work with the city to review this policy decision and consider making adjustments to what the city allows for commercial display and revenue.

If you wish to express your concerns, please reach out to the Vista City Council or contact the NCPC at info@northcoastalpreventioncoalition.org.

The mission of NCPC is to reduce the harm of alcohol, tobacco, marijuana and other drugs in the cities of Carlsbad, Oceanside and Vista through community action, education, support and collaboration. Funded in part by the County of San Diego, HHSA, Behavioral Health Services and by SAMHSA though the STOP Act with grants to Vista Community Clinic.